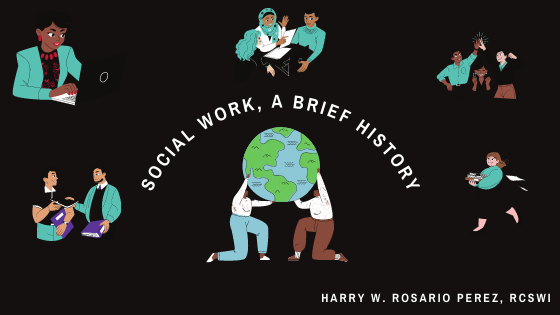 Since its inception, Social Work was a profession with a philanthropical nature. It originated with the sole intent of aiding those less fortunate. As such, in many countries’ programs sprung up where Social Workers would provide advise and counseling on proper nutrition, hygiene, prenatal care, adequate raising of children and general popular education. This kind of service was mostly directed at the part of the population which did not have access to education or that merely had a learned their letters and numbers with the intent of practical, every day, application. Due to its very nature, and as a product of the times where Social Work was born as a profession, it was a field dominated by females, as it was believed that for this kind of work empathy and care was needed.

Over time, Social Work has evolved as a profession, becoming more inclusive adding men to its ranks and addressing more profound social issues such as social injustices, poverty, sexual abuse, child protection, special needs, gender equality, lobbying for the striking/implementation of laws, and in more recent years mental health. Due to its nature as a profession, Social Work focused more in working with families, groups and marginalized communities. However, it has begun to understand, as a profession, that due to the largely unresolved, social issues treated by Social Workers in the past; the population’s they used to attend to has seen their mental health begin a steady decline. The distress created by unfair working conditions, severe financial issues, long standing history of domestic violence, sexual abuse and gender inequality, amongst other issues, has affected the population to such a degree that it has demanded the evolution of Social Work as a profession, appealing to its nature as both a science and a form of art, Social Work has evolved to include a more clinical aspect to its development. As such, Clinical Social Workers began to arise in the ranks of Social Work. This new breed of Social Workers began to fill a void that had previously gone unnoticed. They realized that there was a direct correlation between the severely declining mental health of the population and the concurring societal problems that affected them. As such, a new approach was birthed where Clinical Social Workers could not only treat the behavioral issues experienced by their clients, but also provide them with the tools to attain a sustainable state of wellbeing. This was accomplished by means of such concepts as empowerment theory, which allowed Social Workers to put back power in the hands of those who felt like their power of self determination had been ripped from their hands. Social Learning Theory, which explained how behavioral patterns were a byproduct of generational learning and social exposition, while providing Clients with the tools to beak those behavioral patterns. As well as Development Theory which would help Clients to understand their development and how the skipping of life stages, or premature behaviors can result in profound trauma or dysfunctional behaviors. All with the intent of having a more holistic socio-behavioral standpoint, which will allow Clients to heal and attain a more profound state of social and personal wellbeing. This also gave rise to a mode of social work previously unheard of, the private practice. While in the past, Social Workers could be seen constantly traveling the roads, visiting Clients in their homes and in schools. Now, social workers have begun to establish their own practices, settling in an office where they will meet clients and provide treatment in an office setting, resulting in a more centralized approach to services, which affords their clientele the chance to receive services in one place, instead of having to partake in visiting multiple agencies.

This evolution has opened the door for a more personalized style of Social Work, where a relationship is forged between the Social Worker and the Client with the sole purpose of providing a chance at recovery through empowerment.